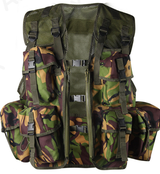 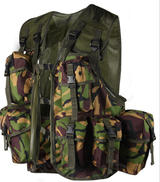 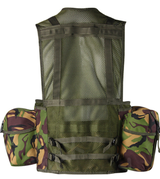 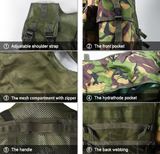 PLCE replaced the British 58 Pattern webbing, which was made of olive canvas: this system was outdated by the 1980s.

The US introduced nylon M67 (and later ALICE) type webbing during the Vietnam War to overcome the issues associated with canvas in damp climates. Following their lead, Britain started the development of their own nylon-based webbing/load-carrying system.

Development accelerated with the introduction of the SA80 weapons system in the mid- to late 80s and trials of experimental PLCE and combat body armour were conducted with selected units in 1983/84. This resulted in 85 Pattern PLCE being issued on a restricted basis. Its design and wide acceptance (popularity) resulted in it becoming standard issue for the British army and was issued in olive green (OG). The Disruptive Pattern Material (DPM) version (95 Pattern/Soldier 95) replaced the OG issue in 1992 and currently Multi-Terrain Pattern (MTP) is issued.

SERSL provided a variety of camouflage patterns including Desert Coyote, DPM or Multicam (owing the MTP patents being in place). DPM is shown for illustrative purposes.

It is manufactured to military specification in 1000d nylon and is available in a variety of patterns. DPM is illustration only. It is the preferred webbing of the British army & armed forces around the world such as Saudi Arabia, Oman, Kenya etc.

• High tensile fully adjustable back straps with ventilated mesh back

• One size fits all